Before I get started today, I just wanted to remind you about Blitsy. They’ve had a big sale running for a while, and now they accept “competitors 40% off coupons”.  As it they weren’t cheap enough already! (I have a parcel winging it’s way to Australia right now!)

For those of you who don’t know, Blitsy is an online store. They have specials that only last until they’re sold out, but they’re prices are very low. There is no cost to join, it’s totally free, but you must join to find out what they have available.  I’ve bought literally hundreds of dollars worth of products over the years, and if I’m truthful, it’s probably more like thousands.

Once joined, you will receive notification of the items on special.

Last week my ex-daughter-in-law married. Since she is the mother of three of my teenage grandchildren (who happen to live with me), we have a pretty close relationship. All three of the grandchildren were in the wedding party, and we (hubby and I) were invited to the wedding.

I decided to make a shaker card for her, and here’s the result: 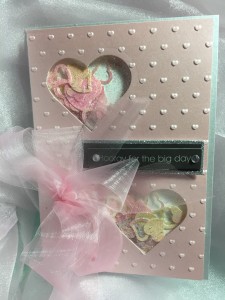 This was pretty easy to make. First off I took some pink pearlized cardstock. Then I embossed it with tiny hearts (using a very old Cuttlebug EF).  Then I cut out two medium sized hearts, put acetate behind each window, padded with foam sponge (I used two layers for depth), then added my ‘ingredients’. For this card I added some heart cutouts, almost transparent star sequins, and some glitter.

When that was done, I added a sheet of white cardstock to the whole thing (this was pre-cut to the same size as the front), making sure it was well glued. It was then added to the pearlized grey cardstock base.

The greeting was from a bought set (I won it at a craft day), then I added a beautiful pink bow that came on another prize on the same day.  It was wrapped around some cellophane, and was too beautiful to pull apart. I knew there would be something I could use it on, and I was right!

Here’s what I did to the inside: 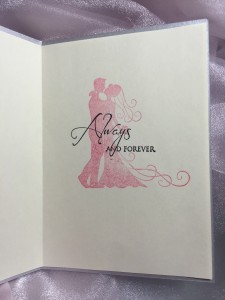 Both stamps are from Gina K Designs – the Always and Forever Duo set, which I believe is now obsolete. I use these stamps a lot!

Because of the shaker parts of the card, it was quite deep, and therefore I was unable to fit it in an envelope. Instead I made a box. I should point out this is not something I do often, in fact, I think it’s only the third time I’ve made a box. Both previous boxes were made on my Silhouette Cameo, but this one was done manually.

I simply measured the card size, then added an additional inch all around. I scored an inch all around, then at the corners, snipped one line, as this would be how the box is secured. (The base was white.)

I did the exact same thing for the lid using pearlized grey cardstock (to match the card base), except I went just a fraction bigger, but cut out a heart shape before scoring. I then placed a piece of acetate on the inside of the lid. 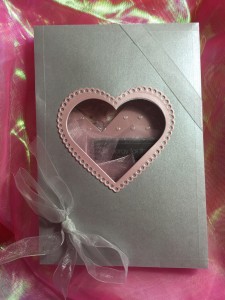 After adding a die-cut heart (cutting out the center with the same die used for the heart die-cut on the lid) I secured the lid to the base with some sheer pink ribbon.

I hope I’ve inspired you to ‘give it a go’ as I’ve never made a wedding shaker card before, or manually made a box. I think both turned out pretty well!