Believe it or not, we’re more than half way through the year.

Yesterday I saw a meme on Facebook that said it’s only 18 weeks until Christmas. Yikes!!

Using my Tim Holtz Mixed Media thinlits, I made this Christmas card. Which I must say, I like a lot. 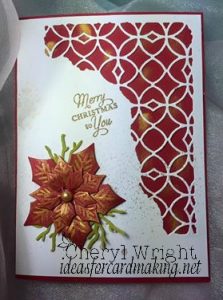 I used a red cardbase, and cut a white topper, which I then cut using the Tim Holtz Mixed Media dies.

The poinsettia was made with the Spellbinders Poinsettia die, which I’ve had for many, many years! I added some Inca Gold to it, to bring out the embossing, and added a gold pearl to it, to finish it off.

The greenery was made with a Martha Stewart Punch, and the stamp is from Stamp-It *I think – can’t find the packaging. I’ve also had the stamp for many years.

When I placed the white topper on the red cardbase, I felt it was a little too plain, so added some Inca Gold over some parts that would show through. Just for a little interest.

I am entering this card in the Mod Squad’s “Christmas in July” Challenge.