By now I’m certain you know how much I love playing with Lavinia Stamps. Today I made a card that I’m really happy with. I decided to use it for the October CUTplorations challenge.  I’ve never entered this challenge before, so totally new to me.

Here is the inspiration photo: 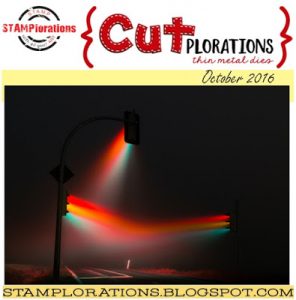 I will admit my card strays a bit from this, but I don’t have any fluorescent colours so I was somewhat limited in what I could do.

Part of the challenge is that you must use a die, and at least one STAMPlorations product. It just happens that I recently joined their stamp club, and received my first delivery yesterday.  I chose a fabulously arty stamp set, as well as the “Magical” die. I chose the latter because of all the fairy cards I make.

First off I’ll show you the background I made. It looks pretty ordinary like this, but once you add all the stamps, it’s great. (If I do say so myself.)

This uses four different blue and purple toned distress inks. I just sponged in circles to get this result. 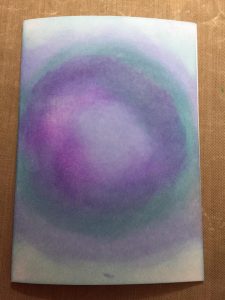 Now for the finished card: 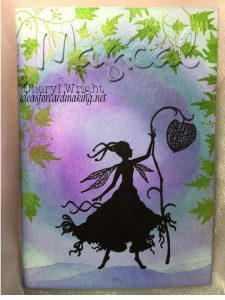 I played around with the die to start with. Cut out the word in black and just sat it on the card. It was way too dark. So I decided to inlay the word. I used three layers, including the top layer. I think it looks fabulous.

I’ve had a bit of a spending spree recently: I also bought myself a StampMaster, which is similar to the MISTI, but is soooo much cheaper! ($40 compared to $125 in Australia.) It also arrived yesterday. A day of happy mail!

I bought it mainly because I find the bigger Lavinia silhouette stamps hard to get a good impression. This one took five goes, but I’d rather that than risk a bad impression after all the work on the background. (I often spend an hour or more on the background of these cards.)

I did all the leaves with the StampMaster as well, which helped to achieve the two-tone effect on the leaves. I did use the rock ‘n roll technique as well.

I’m very happy with the results of this card.