One of my closest friends has been quite ill this year, so to cheer her up I made her a get well card. 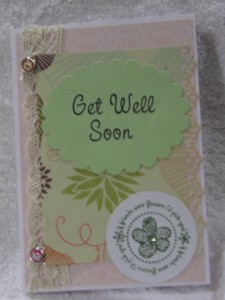 This is a very simple home made get well card, that began with white cardstock.

Next I trimmed a piece of pink and white paper to slightly smaller than the card stock, leaving a small border all around.  The paper came in a free pack with a  magazine I purchased, but you can use any vintage style paper, or in fact, any paper that looks good.

I then took some ‘bold’ paper, something that would stand out above the pink paper.  This was cut considerable smaller than the pink paper, as can be seen above.  On the right hand side, I used a border punch, just to make it a little different to the left hand side. 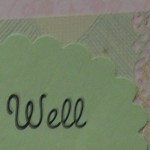 Next I found some green card stock that contrasted the bold paper.  This would be used for a label.  I used my Nestabilities Large Classic Scalloped Ovals Die

to cut it out, then stamped it with “Get Well Soon”.  That was glued to the top half of the paper as you can see above.

So… I got a couple of brads that I’d purchased at Kaisercraft, (but you can get from Amazon.com

or any craft store) and added one each to the top and bottom of the lace.  Initially they were exactly the same, but then I decided to use two different brads, using two colors from the bold paper I’d used. 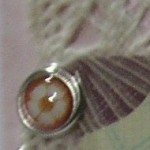 It was a little tricky adding it to the lace because it was already glued down, but I did eventually get them attached.

Last but not least, using white card stock, I stamped a sentiment:  If friends were flowers, I’d pick you.  To lift the sentiment, I added a rhinestone to the center, using a matching color to the ink used.  This was attached to the bottom right hand side of the card.

This card can be used for just about anything. Just change the sentiment to suit your purpose.