It’s been a very busy week, and I was only able to put the finishing touches on this week’s Mojo Monday card last night. 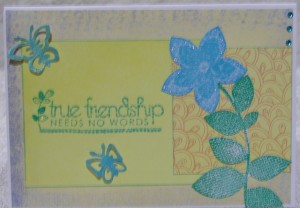 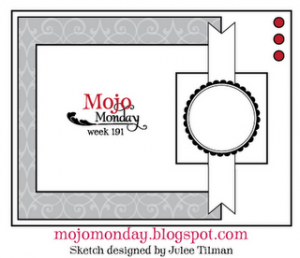 I began with a white base card, then topped it with pre-printed paper.  The paper was similar to the yellow you can see on top, but it was ‘sponged’ with blue around the edges (as seen around the outside of the card).  You could easily do this yourself.

After adding that to the card, I took some deeper yellow paper and cut it smaller as shown.  I stamped it with the sentiment “true friendship needs no words”. I did this in the same ink I used for the flower, which was  Stampin’ Up! Tempting Turquoise (Stampin’ Spot).

Then I took some patterned paper that I felt contrasted well with the color scheme I was using.

I wanted this card to be quite different to what I’ve done in the past, so I decided to use a stamp I’d not used before.  I *think* I bought this at Kaisercraft, but don’t quote me on that.

This is one of those stamps that mix and match, so you add the flower head you want, then the leaves.  I stamped the flower on white card in Stampin’ Up! Tempting Turquoise (Stampin’ Spot), then cut it out and pasted it onto the card after working out the correct position for the leaves and stem.

Once I’d done that I stamped the leaves and stem directly onto the card using Stampin’ Up! Glorious Green (Stampin’ Spot).  Unfortunately it was very uneven in coverage, so I stamped it again, this time on white card.  I then cut it out and pasted over the top of the stamped image.

I actually prefer this as it gave the card more dimension as a result.

I added “Diamonds” Stickles glitter glue to the center of the flower, and around the outside edges, as well as on the leaves of the sentiment stamp. 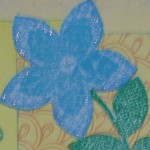 After I’d done that I felt the card needed something else.  Again, I took some white card stock and covered it in the same ink I’d used on the flower. I simply ‘wiped’ the ink across the card, then added a little gold spritzer over the top (again, Stampin’ Up!).  I cut out two butterflies of different sizes using the Marion butterfly die. 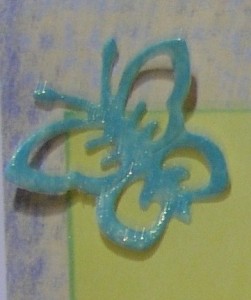 Last but not least, I added three rhinestones to the top right hand corner of the card to conform with the sketch.

As you have probably realized, I took a bit of liberty by using the flower and leaves/stem instead of the circle  and square shown on the sketch.  However, you don’t have to use the same shapes as they’ve used in the sketch, so I don’t see it as an issue.