It seems like forever since I’ve posted here. I’ve been making cards, but haven’t really had the time to post – mostly because I like to add instructions, and that can be time-consuming.

Today I’m sharing an engagement card I made for a friend. Her son is getting engaged next month, and both her son and his fiancee love birds. She wanted two cards, one for her daughter to give the pair, and one from herself. 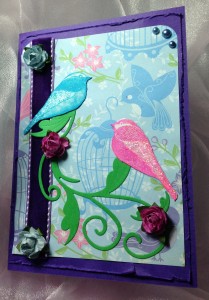 This was a very simple card to make. I used purple cardstock – I wanted to pull one of the colours out of the design paper (DP), plus I had some beautiful velvet ‘ribbon’ that I also wanted to use.

The DP was a piece I had in my stash – it was perfect, and was the only piece I had.  It fitted this card beautifully, having birds and birdcages on it. So, I cut a card topper the same colour as the cardstock, but slightly smaller.  Then I distressed that topper.

Next I added the DP, and taped down the velvet ribbon.  I cut out a flourish with leaves, and added it.  Then I rounded the corners at the top of the card.  Next I stamped the two birds using pink and blue ink. They are from a Kaisercraft set I’ve had here for ages.  Before adding the birds, I added some Kaisercraft Blooms (flowers), again pulling colours from the DP, but using only blue and pink.

Once the flowers were in place and taped at the back of the card topper, I glued the topper down onto the cardstock.  At this point I added the birds using Glossy Accents.

Last but not least, I used some Stickles Star Dust on the bird’s wings.

Because I know you like to see the inside of cards, here’s what I did for this card: 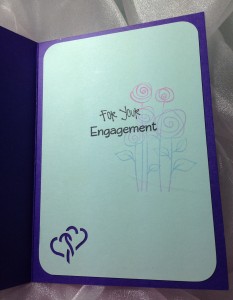 The joined hearts are from a punch I’ve had for a while now.

I will endeavour to add the second engagement card in a few days.