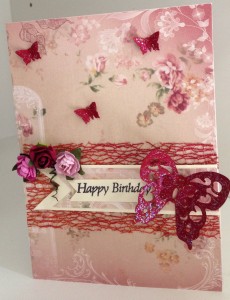 I made this card for a very special friend.

The background paper was purchased a couple of years ago, put away, and totally forgotten. When I had decided on the colour scheme I wanted to use for this card, I went searching, and there it was.

I cut the DP to size, then used some of the left over for the banner. I meticulously cut the banner so the gorgeous flowers would show at the end, then promptly covered them up with a butterfly!

I added some matching netting underneath the banner to give it a bit more depth. It was added using double-sided tape as wet glue would just seep through the netting.

The stamp is from Inspired by Stamping , and is from the Ahoy, Matey stamp set. (Just because it’s from a masculine set, doesn’t mean it can’t be used on feminine cards!)

The flowers are from my stash.

This card has been entered into the Inspired by Stamping Birthday Theme challenge, which celebrates their new release.