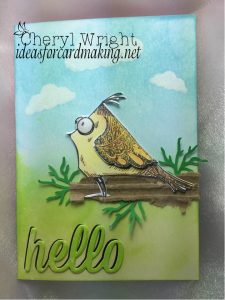 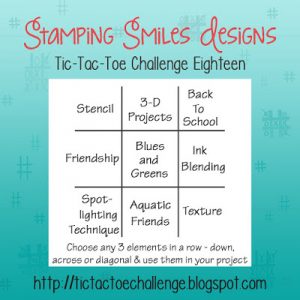 Still on my challenge spree, I found another challenge site. This one is called Tic Tac Toe, and works the same as the game – you have to follow the row.

The combination I chose is: stencil, blues and greens, and texture.

We’ve bought a lot of new sheets and doona covers lately, because we’ve updated some of our beds, and I have a lot of packaging. Some of which I’ve added to my scrap stash. So I started off with some corrugated cardboard, which I was going to sit the Bird Crazy character on. I tore it down, and peeled off the layers, but felt it was too big.

I tore it down again. Suddenly it became a branch.  And branches need leaves. These were made using a Martha Stewart punch.

So that was the beginning of this card. Everything else came later.

I sponged my background using Twisted Citroen and Broken China, then realised I had to use some stenciling on it. So I thought clouds. But I don’t have any cloud stencils, but I do have cloud dies. I made a cloud stencil using my dies. I used Adirondack Snow Cap acrylic paint for the colour.

I coloured the bird with pencils, then coloured the wing (only) of a second stamped image then cut it out and popped it up to give some dimension. I then popped up the top half of the bird and wet glued the bottom half – to make it sit evenly.

I used glossy accents on the eyes.

Last but not least, I cut out the word “Hello” three times – two in Twisted Citroen (which I sponged onto white cardstock), and once in black to use as a shadow/outline.  If I hadn’t used the black, it would have just blended in with the rest of the card.