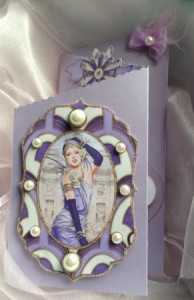 My sister turned sixty a couple of days ago. And because it was a ‘special’ birthday, I wanted to make a very special card for her. Originally I thought of a step card, but cascading card quickly came to mind.

However, I’d never made one before, and had absolutely no idea how to go about making one.

I remembered that Christina from Card Making Magic had a video on the technique, so sought out her video. I was very surprised at the simplicity of the actual card, as I was certain it would be incredibly complicated.

The card is quite simple as you can see, but adding all the decorations took quite a while. The card – from start to finish – spanned over a few hours. However, I admit to being a perfectionist, and I did cut out every element by hand, except for the main greeting, which was cut out with Spellbinders Dies.

I’ve added some more photos here, because the above photo really doesn’t show you much of the card.

This first image is on the front, and is the main image.  It is from a CD Rom I got free in a cardmaking magazine, and is from Debbi Moore Designs. (Art Deco Rome CD Rom – http://debbimooredesigns.com/) Pearls were already printed on the image, so I added pearl brads, top and bottom, then pearls around the sides. This was to give the image more dimension.  For the smaller pearls, I added a little Glossy Accents because I didn’t want them to fall over sometime down the track. 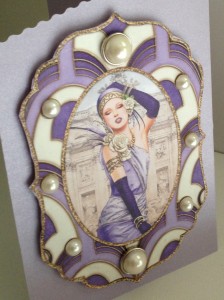 I printed the image on my normal printer, then cut it out.  But I found it was a bit flimsy, so added it to some cardstock for backing. Besides, the brads would have been way too heavy on the computer paper.

On this next photo, the ‘greeting’ on the left is from my stash.  I’ve had it so long I can’t remember where I got it. The other images are from the CD. 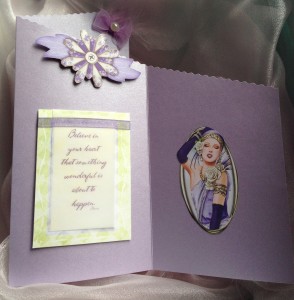 Below is the ‘other’ inside. The image on the left again came from the Art Deco CD Rom.  The “60” was cut on the silhoutte. After cutting, I pushed the numbers into Versamark, then embossed with Ranger “Bridal” embossing powder.  I repeated the process as I wanted a more glittery effect than I first got.

The main greeting (Happy Birthday) was made by cutting an oval from Spellbinders Oval Nestabilities using the same cardstock as the main card, then cutting a shape from Spellbinders Labels 20 using white cardstock. I didn’t like the original effect as the oval blended into the main card.  So I ran the around the edges with gold ink. I did the same with the white card to make it more uniform. 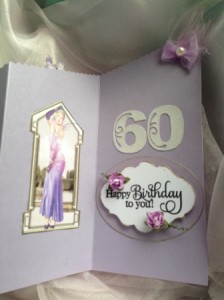 The greeting itself is from Inspired by Stamping, and the flowers were in my stash. (They were from Kaisercraft. I always have a big stash of flowers available!)

Here’s a close up of the greeting: 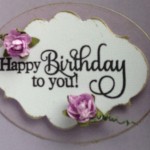 You may recognise that gorgeous greeting, it’s from Inspired by Stamping, and it comes from the Big Wishes II set. This particular greeting is my absolute favorite birthday greeting, and I find myself reaching for it all the time.

Well, that’s it.  A lot of work for sure, but I really do think it was worth the extra effort for such a special occassion.