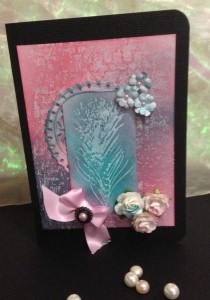 I have a subscription for Australian Simply Cards, which is a fabulous cardmaking magazine.

Two issues ago they featured a fabulous technique which used acrylic paint. I was a bit skeptical, but the card they’d made was fabulous. I wanted to use the same (or similar) stamps they’d used in the magazine, because I loved them so much. Unfortunately, they took a bit of getting, and I waited an entire month for them to arrive. (Probably because everyone had the same idea!)

The first card I made was almost exactly the same as in the magazine. This one however, is totally different.

Using whatever stamps you choose, stamp with white acrylic paint.  Then, once the acrylic paint is dry (took around five minutes for me), sponge over the stamped area with distress inks.

What I’ve learned is:

* You need to spread the acrylic paint fairly thinly. I used an acrylic block to put the paint on, but you could use any surface that is reasonably flat and allows you to spread the paint.

* You need to clean your stamps and acrylic blocks fairly quickly after you’ve finished. I used warm flowing water.

* Don’t soak your stamps because it will wreck them.

* Your fingers and hands will get very messy. They’ll come clean when you’re cleaning the stamps.

* Put down plenty of paper on your work area, otherwise you’ll also need to clean your table!

I stamped several cards at the one time – mostly because it’s such a messy process.

For the card above I’ve used Worn Lipstick and Peacock Feathers distress ink.

The background stamp is from Stampendous, and the peacock feather is from Deep Red.

The element you see tucked behind the feather is a Heartfelt Creations die (from Spellbinders).  I thought it would add a little something extra. I sponged in the same colours as the rest of the card.

After adding that, I decided the top right-hand side of the feather feature was bare, so I also added some tiny flowers at the top, which are from that same die set, and finished them off with tiny pearls coloured with Copics. The antique brad was also coloured with Copics.

The larger flowers are from Inspired by Stamping.

I will eventually add the first card I made, but I’m waiting on my Vintage Tickets from Inspired by Stamping to finish it off.  I ordered them late last week, so they should arrive in the next day or two.

I’ve entered this card into the following challenges:

Inspired by Stamping Monthly Challenge (which is flowers this month)

23 thoughts on “Stamping with Acrylic Paint”