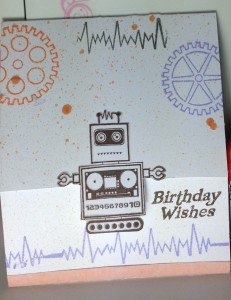 Todays card is a tri-fold card, which I’ve never done before.  Apart from messing up the measurements, which is typical of me (I am NOT maths oriented!), it was pretty simple to set up.

The example card was a flower and leaves, and we were shown a technique to alter the appearance of each.  Unfortunately I have no totally solid stamps, so was unable to do that technique.  However, I decided to forge ahead with the tri-fold card, but without that particular technique included.

So… I made a robot card, as you can see. I made the top flap a little longer, so I could incorporate the robot hanging over the bottom flap a bit.  I then manually cut around the bottom of the robot, up to the arms.

Most of the stamps came from a Kaisercraft set, but the greeting is from Inspired by Stamping.

Shown above is the finished card, but originally, it was as shown below.  I felt it was a little bare, so added Mandarine Glimmer Mist.  There’s not a lot of Glimmer Mist added, but I think it did the job. 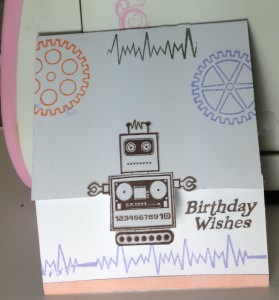 We were given additional color choices for the weekend, and the color combination I chose was: brown, purple, orange, grey, and cream.

In case you’re wondering, that’s fabric tape along the bottom. I folded the bottom flap in the wrong spot, so decided to cover up my boo-boo with colored tape!