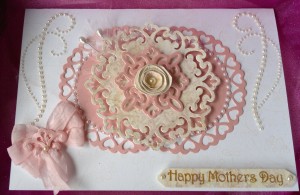 Challenges I have entered this card in:

——————
This card was inspired by Becca Feeken’s card, which can be seen here.

In the past I’ve found that I’ve wasted a lot of time and effort, not to mention craft supplies, because I haven’t planned ahead.  These days I work out what I want to do before I start, so that I have a much better idea of what I need to use.

Wherever possible, I cut out and prepare all the dies before actually assembling the card.

I started off with a piece of white A4 card, which I folded in half.  I felt the background was too bare, so I stamped a small flower with Worn Lipstick so it would show up, but wouldn’t be overwhelming and take over as the focus of the card.

Then I cut out two of the largest size circles from the Spellbinders Heart Circles die set. This was done using Pink Pearlized paper. I needed to overlay the circles so I cut off part of one circle, then laid them side by side, and trimmed off any hearts or partial hearts that were going to ruin the look of the circles.

Next I took a piece of light cardboard (I actually used packaging from some Kaisercraft Pearl Swirls) and cut of the largest ‘circle’ from Spellbinders Mega Dies, Parisian Motifs.  I felt it was too bland, so I took a ‘script’ stamp and stamped all over it in Vintage Photo Distress Ink. Immediately I took a piece of paper towel and smudged the script before it could dry.  Then I took a pink chalk ink and stamped randomly with a Vintage style stamp. I then smudged that as well.

It doesn’t matter what stamps you use for the background, because they won’t be recognisable by the time you’ve finished.  Seriously.

Last but certainly not least, I placed the Parisian Motifs cut out into an old box and sprayed it all over with Perfect Pearls Mists in Interference Red. Once sprayed it takes at least ten minutes to dry completely, or you can use your heart gun to dry it more quickly. (Seem image below for a close-up of the result.)

Make sure you make plenty of the marbled card if you decide to make a flower for the top like I did.  I used some leftover marbled card to finish it off. (Click the image to see a larger view.) 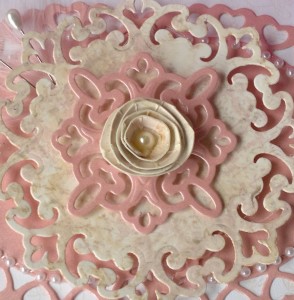 The smallish die on top of the marbled card is also from the Parisian Motifs set.  I used the same pink card that I used for the heart circles on the bottom.

Last, but certainly not least, I cut out the smallest motif, which is for the corner, but I used it as a sleeve on my bow.

Okay, here’s what I did:

Put the Heart Circles together, trimmed any excess (per above instructions) then added pearls to each side. I joined the heart circles with double-sided tape once the preparation was done.  The pearls need to be fairly small, otherwise they’ll look bulky rather than dainty.  I used Kaisercraft Pearl Strip (white).  I used approximately half a strip per heart circle.

When placing the circles on the main card, make sure you leave enough room to add a Pearl Flourish each end of the card. (I used Kaisercraft Pearl Flourish in white.) 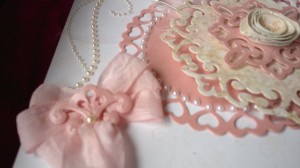 I stamped “Happy Mother’s Day” on a strip of left-over marbled card, cut it out, and added a white pearl to each end.

With the left over marbled card, I cut a square and cut out a strip to make a small flower, so they matched.  I added a white pearl to the centre.

Once you have glued down all your die elements, you can then add your flourishes.  Or if you prefer, add them first.  Just make sure there is room before you stick down your circles.

Last but not least, I made a bow out of Seam Binding. Before making the bow,  I used Spun Sugar Distress Ink to die it to the color I needed to match the pink in the card. I then attached the corner motif to add more decoration to the bow, then added a white pearl.

That’s it – all done and ready to give!

*If you want to try this yourself, you’ll need Eggshell colored Seam Binding.  I ‘splotch’ the distress ink onto a marble bread board, but you could easily do it on a heatproof craft mat. I then spritz with plain water, and run the seam binding through it until there’s enough color density in it.  Then just leave it to dry, or you can use the heat gun to dry it quicker.

**I found a video that you might find helpful if you’d like to try dying your own seam binding.  It’s a similar technique to what I use but not the same.  Note:  I always use disposable gloves, and you’ll see why in the video!