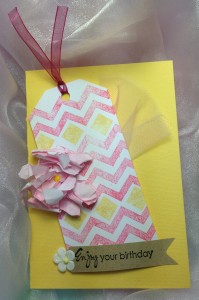 Day Four cards were Mother’s Day and Father’s Day. I chose to do a birthday card instead.

Since I’m running behind, and I want to try at least one technique from each day, (and I have shopping and other mundane chores to do, even if I would rather play in my craft room!) I’ve made just the one this time. As you can see, it’s a ‘hers’ card.

The main flower was made with Tim Holtz Tattered Flowers die. (Love that die!)  The stamps are all from Gina K Designs. The greeting is from the True Love set, and the pattern on the tag is from the Pretty Patterns set.

I’ve just realised I didn’t actually explain the purpose of this class. It is to show how you can use the same or similar layout and products to produce both a male and female oriented card. There are of course subtle differences, and in many cases, it’s only a matter of changing the ink colours, the papers, and swapping pearls for buttons. Of course there’s more to it than that, but that’s the basic idea.

We’ve learned lots of new techniques along the way, and I’m loving it!

2 thoughts on “His & Hers Online Class – Day Four”