I am so far behind the eight ball it’s not funny, but I have been making loads of Christmas cards. I will add some over the next few days so you can see them, but apologize that it’s probably too close to Christmas to give you inspiration for your cards. (You’ve probably already finished, and packed your Christmas stamps away!) 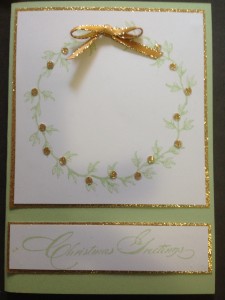 This year I vowed I would not, under any circumstances, buy any more Christmas stamps. I could make do with what I already had.

I have so many Christmas stamps – dozens in fact – so was reluctant to spend money on more.

I belong to a Facebook group where retired Stampin’ Up products are sold. Some are new, some are  second-hand, it depends on how old they are, and who is doing the selling.

Most of us buying these sets are doing so because they became unavailable (due to limited quantities) when they were in the catalogue. Or because we didn’t know they existed back then.

I managed to get an incredibly elegant set called “Special Season”.  (If you would like to check it out, go to my Pinterest board featuring this set here.)

The greeting shown on this card is from that set. The wreath however, is not a Christmas stamp at all. It’s from a set called Stippled Blossoms, which is a fabulous set, and I use it regularly for birthdays and thank you cards.

Again, you can check it out on Pinterest. This is another retired set, which I’ve had for several months now.

While I was in the process of making my Christmas cards recently, I found a video that uses the leaves from the Stippled Blossom set to produce a Christmas wreath.

I thought this was going to be very difficult and require a lot of practice, but it was incredibly easy to do.

While I’ve made a wreath using the technique shown in the video, the card itself is nothing like the orginal card shown.

To sparkle up my card I’ve added some glitter glue, some matching glitter paper, and some gold ribbon.

This close up gives you a bit more detail. 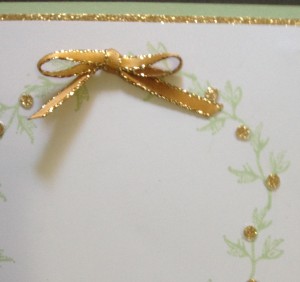