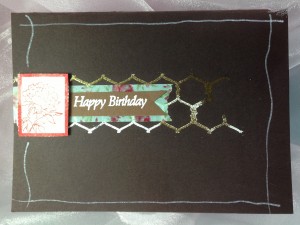 The banner you have when you don’t have a banner stamp.  Hmmm, right?

The embossed banner was done totally with masking. However, I know it’s kinda hard to see here.  That’s because I chose the wrong stamp to use for this technique.  I really needed something that would be more defined. I used the chicken wire background, but think the Vintage Checkerboard pattern would have been better.

But I’m still pretty happy with it.

I used French Country Backgrounds from Inspired by Stamping for the banner. Then used something similar to the Ombre Technique for the embossing.  It turned out much better this time.

This card is a little too bare for my style, but that was the assignment. (After adding the white hand-drawn banner, I was much happier! Totally forgot to do that originally.)