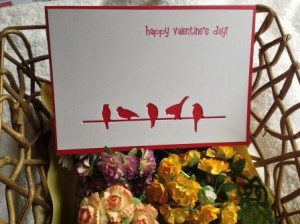 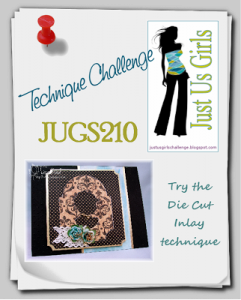 I’d never heard the term ‘die inlay’ before, so I was intrigued. Basically it’s using both the negative and positives of the die, and not wasting anything!  It’s also a very quick way to make two cards in almost the same time as making one!

This is the technique challenge currently underway on Just Us Girls (JUGS), and it’s a beauty!

It just so happens that I’d bought a new (very sweet!) die at the weekend when I attended a local craft show.  It’s a Penny Black die, and I must admit, that until I saw the die, I had no idea that Penny Black made dies!!!

This one is called “In a Row” and features some very sweet little birds sitting on what looks like an electricity line or a stick.

These were pretty quick and easy cards to make, and since I’m in the midst of making Valentine’s Day cards for the troops, that’s what I made these.