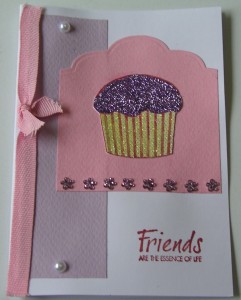 Cupcakes are all the rage for cards right now.  No idea why, but everywhere I turn, there are more and more cards featuring cupcakes!

Because of this, I decided to make a simple cupcake card, and show you how to do it.  Then I decided to show you a variety of ways to use the same stamp.

I began by stamping this simple cupcake stamp on plain white paper.  Because I have treated each cupcake differently, I have gone for different designs for each individual card.

For this first cupcake I used purple glitter for the icing, and ‘diamonds’ glitter glue for the base.   Once dry, I cut the cupcake out, ready to add to my card.  Here, I’ve taken a plain white card then added a strip of mauve card to the left. (This is approximately three quarters the length of the white card.)  Then I’ve centred it, leaving a small gap at the top and bottom.  I then found a piece of pink card, and cut it to approximately half the length of the white card.  Then I ran it through my Cuttlebug using the Nestabilities Labels Six, but only went far enough to give the scalloped shape at the top, then rolled it back out again.

After that, I overlapped the pink card on the mauve, glued on the cupcake, then added some flower shaped brads to the bottom of the pink card.

I’ve also added a strip of pink ribbon to the left of the card, tying it in the middle.  Using the same color stamp pad as the cupcake, I’ve stamped a greeting. The finishing touch on this card is the pearls on the top and bottom of the mauve strip. 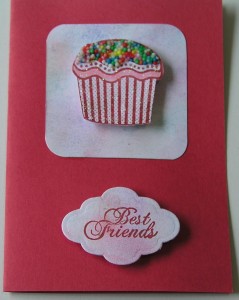 This card is very simple, but very effective.

I’ve used hundreds and thousands for the topping on this card.  They’re a little fiddly, but easy to use.  Just make sure there’s plenty of glue, otherwise they’ll just roll off. I’ve then used clear glitter glue for dotted part at the top, then pink glitter glue below it.  The base of the cupcake has been done with ‘diamonds’ glitter glue, and again cut out.

For the background papers, I’ve simply taken a piece of paper and sponged it in a variety of colors, giving a rainbow effect. I’ve then cut it into the shapes I required.

I’ve used the Nestabilities labels six for the bottom label, then stamped it, again using the matching color of the cupcake.

In addition, I’ve used a thick double sided tape to lift the cupcake off the background, giving it a 3D effect.

I’ve added these to a red card, but you can use any color you want. 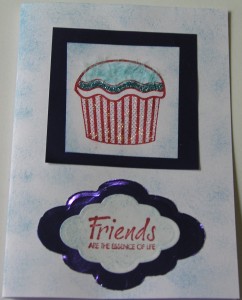 Taking a white card this time, I sponged the entire background with Opaque Baby Blue Stazon Ink. The cupcake was decorated with a chopped up blue feather, which was then glued on using tacky glue. I used a dark blue glitter glue for the next level, then clear glitter glue on the next lowest level.  The base of the cupcake was again done using ‘diamonds’ glitter glue.

I then cut a square of shiny blue paper, and added a piece of white, that was again sponged with Opaque Baby Blue Stazon Ink. The label was done in the same fashion, again using the Nestibilities Labels Six.

You can get a similar effect using just one layer instead of the two I’ve used.  Just play around until you find something you’re happy with.  I tend to use whatever I have in my craft trolley at the time. 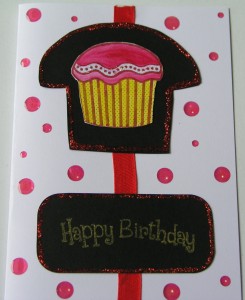 This card was different to anything I’ve done before.  I wanted to make this a fun card, and aimed it at children.  First, I painted the ‘icing’ red using card paints. I used ‘diamonds’ glitter glue for the dotted section, and again used the red paint below it.

The base was done using ‘crystal’ glitter glue.  While that was drying, I took some black card stock, and drew out a large cupcake shape freehand.  When I was happy with it, I cut around it, then used red glitter glue around the outside edges.

I also used black card for the “Happy Birthday” label at the bottom of the card (stamped in Gold), using a corner punch to round the edges, and again used red glitter glue around the outside edges.

Red ribbon has been glued inthe centre, from the top to the bottom of the card, then the black pieces added onto the ribbon. I then added the cupcake, but felt something was missing.  On searching my craft trolley for something to complete the card, I found these stick-on “droplets” (which are basically molded bubbles) of a variety of sizes. I got these from Kaisercraft, and they’re available in a  variety of colors.

As you can see, with a bit of playing around and some imagination, it’s possible to make totally different cards using the same stamp.  It’s a matter of thinking outside the norm, color co-ordinating, and not stressing over whether or not it will work.

I used to worry over how cards would turn out, but now I’m prepared to be more flexible and carefree about the results.  If they don’t work, I will bin them, but thankfully that doesn’t happen often. I do spend a short time planning before I start out, which saves a lot of grief.

I hope you’ve enjoyed these cards and have as much fun with them as I did!