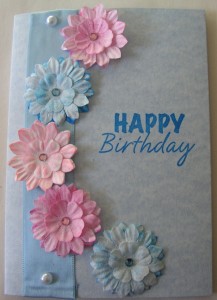 I made this card for my mother-in-law’s 81st Birthday, so it had to be something very special.

It’s difficult to see in the image, but the card I’ve used is a marbled pattern of white and light blue.

I started by placing wide blue satin ribbon and gluing it down the card, then stamped “Happy Birthday” in a contrasting blue ink halfway down the card on the right.  (The same blue I’ve used on the flowers.)

Taking three sizes of white flowers, then using ink pads, I colored the largest flower by rubbing it across the stamp pad.  I wanted this base flower to be quite dark in color, as I’d planned to make the color lighter with each layer. 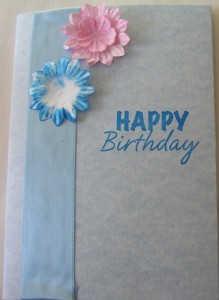 As you can see in the image on the right, I only inked the outside petals, not the entire flower.  That’s because the next layer would cover the center, so it would just be a waste of ink.

The next two layers were done by sponging.

Using the same stamp pad ink and color as bottom layer, I used a sponge to apply the ink.  If you’ve never done sponging, it’s a simple process.  Literally dip the sponge onto the stamp pad, then with an up and down motion, dot ink to the flowers. For the top layer, I tried to add more ink around the outside of the petals, much like you would get on real flowers.

I used three different colors for the flowers, rotating them as I worked my way down.

Rather than have flowers in a straight line down the ribbon, I added them on a curve.

Each layer of flower was glued with the tiniest amount of tacky glue.  I prefer tacky glue where appropriate, as it allows time to reposition embellishments.  Sometimes this is not necessary, but often it can mean the difference between a great card, and a mediocre card.

I like to have items in the exact right position, and using tacky glue gives me that litte bit of extra time to make sure it happens.

Once all the flowers were in place, I added an appropriately colored rhinestone to the centre of each one. I wasn’t totally happy with the effect, as I felt something was missing.  So I added a pearl brad to the top and bottom of the ribbon.

They finished it off nicely.

I’d originally planned to add three of each colored flower to the front of the card, but decided it was too crowded.  Because I had one complete flower over, I added it to the inside of the card.  It was a nice effect.

And yes, m-i-l loved the card!