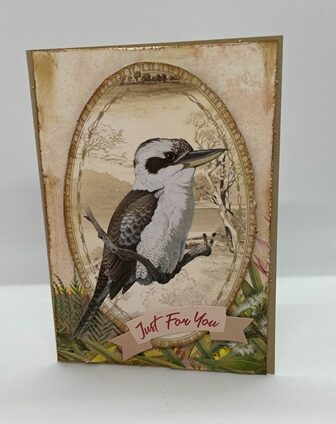 It’s Cheryl here, and since it’s almost Australia Day, I thought I’d make an Australiana card. You might recall I made a card folio back in November using the Sweeping Plains collection. That depleted practically all the design paper I had for Sweeping Plains, and left me with only some scraps and a handful of cut aparts. So for this card I had to be very frugal.

Using Cinammon cardstock I cut my base. Next I cut a piece of design paper slightly smaller than the front. I chose a piece that had some greenery on it, as I’d decided to use a cut apart that featured a Kookaburra, since they are one of my favourite Australian birds.

I wanted to make this card a little different, so instead of using the cut apart as it was, I cut around the oval surrounding the bird and scenery, making sure not to cut off the tail. This way the tail sits below the rest of the oval, and gives a more texured appearance.

I distressed around the edges of the topper and the featured image using scissors, but you can also use a distress tool. Then, using blending brushes, distressed with ink on both pieces. 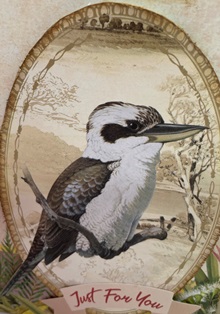 I glued the topper to the base, then added foam tape to the Kookaburra feature image and stuck that down. Lastly I took a greeting from the Sentiment Pack and put foam tape on each end, then stuck it across the main image on a slight angle.

And that was it. My card was done.

This very simple card could be used for just about any ocassion by changing up the sentiment. It would make a lovely masculine card, but is just as suited to women.