Okay, so I nearly forgot to post this card!  And I made it especially for those of you in the US who celebrate Halloween.

Here in Australia, it’s not something that’s widely celebrated, although I must admit, the shops are certainly trying to make it a big commercial celebration. 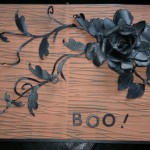 I don’t have any Halloween stamps whatsoever, so decided to improvise.

The flower was made using Tim Holtz Tattered Florals, the leaves are from Spellbinders, the flourishes not sure, but it’s a cheap brand.

The ‘greeting’ was made using Cuttlebug letter die. I’ve used orange card and Forest Branches EF for the background, which I’ve lightly sponged with black Stazon. You can probably see the join down the middle as I have a Cuttlebug, so can’t emboss large areas.

I cut out the flowers and leaves from shiny black cardstock, then spritzed them all with water and scrunched. I left them scrunched up until almost dry as I wanted to get that ‘almost dead’ effect.

I think (hope!) the result is not too shabby, particularly for an improvisation!