I have applied to join the Couture Creations design team, and this is my audition post.

I’ll start with a notebook I bought for a writer friend. She does all her writing by hand before adding to the computer, and I was looking for a nice thank you gift for her, and came up with this idea.

I bought the notebook at a $2 shop (although it cost more than $2 🙂 ) and covered it using papers and products from the Magnolia Lane range by Ultimate Crafts. 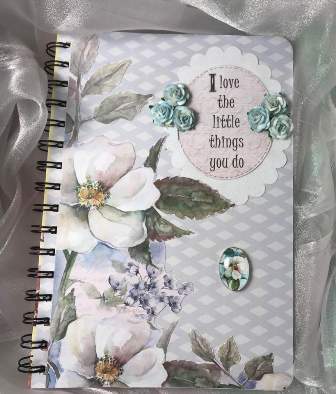 I added the soft blue background to the notepad to start with. I just happened to have a punch that allowed me to thread the paper through the binding, covering up the original background.

I fussy cut the large flowers and leaves, from the same paper pack. The beautiful words were also cut from the same pack. It was originally rectangular, but I used an oval die to cut it out.  I also cut a  scalloped oval (Spellbinders) from white glitter paper, then added the saying on top. I added some flowers on either side, then added the decorative oval from the Magnolia Lane Collection “Oval Cabochons”.

This was a very simple project, but I’m very happy with the results.

Along similar lines, I made a mini album and matching notepad for another friend, and made a very basic video to showcase it. I will apologise now for the glare from the material I sat them on, and will ensure I don’t do that again. Ever!

On another subject totally, I recently went to my local craft fair where I saw the Go Press and Foil machine being demonstrated. I was so taken by it, that I bought one.

It was delivered a few days later, and here are the results from my very first use: 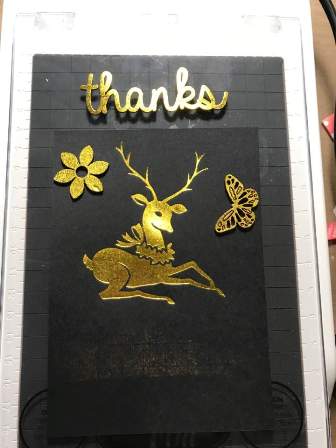 It is very simple to use, and as you can see, the results were perfect. There was no practice beforehand, this is my absolute first use. The reindeer was done on black cardstock, and the rest on chipboard. 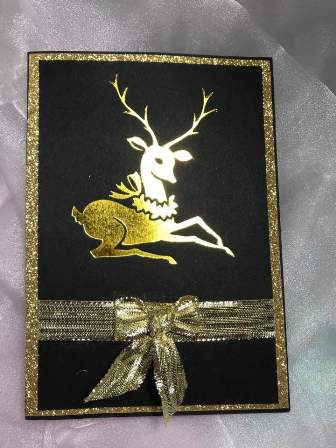 Above is a very simple card I made using that first reindeer foiling. I added some gold glitter paper onto a black cardstock base, then added gold ribbon and matching bow to the foiled cardstock. Lastly I added the topper to the glitter paper base.

Next I pulled out one of my Couture Creations embossing folders, which I’ve had for a very long time. 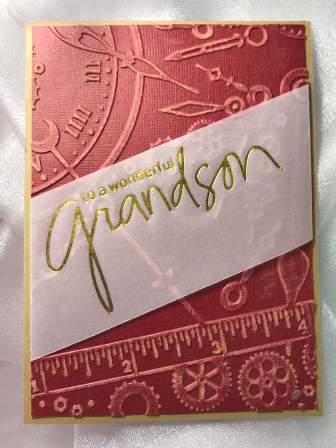 I used a kraft base, then embossed core cardstock. After embossing I lightly sanded it so the pattern would show through. Using vellum, I foiled “to a wonderful grandson” using a hot foil stamp die and the Go Press and Foil machine, then folded the vellum around the back of the card topper on an angle. Lastly the topper was added to the base. And that card was finished.

As you can see, I’ve done quite a bit of playing lately. I’ve done several Christmas cards, and here is one of them. 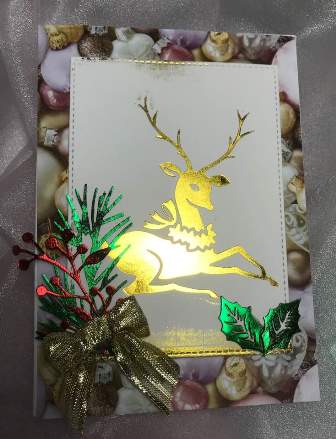 For this card I used the Reindeer hot foil stamp die to foil on the Go Press and Foil machine, using white cardstock, which I then cut out using MFT stitched dies. The design paper you can see in the background is from Kaisercraft. I foiled the Tim Holtz Christmas Greenery, and although I believed one layer die cuts would not foil, these ones did. I must admit there were a few tiny spots here and there that didn’t foil properly, but on the whole they came out fine. In future I will add several layers before foiling die cuts.

I added a gold bow using my glue gun, and lastly added two chipboard holly leaves that I also foiled. And that was it.