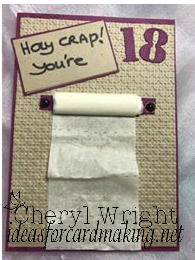 Sunday was my eldest grandchild’s birthday. He turned 18 and my first thought was “holy crap, where did the time go?”.

I’d seen cards with a similar message (on Pinterest), so decided to make such a card for him.

I cut some tissue paper to size and rolled it around a strip of cardstock that matched the base. I attached it to a card topper I’d embossed with a masculine embossing folder.

I hand wrote the message as I had no stamps I could use. And because I was using cardstock, decided it would be a little more difficult putting it through my printer. (I’m sure the less technically challenged could manage that!)

Last of all I cut out the number 18 using the same cardstock as the base. And that was it – my card was done.

FYI, it did elicit a small smile from him. Quite an accomplishment given his age, AND he’s a male. 🙂