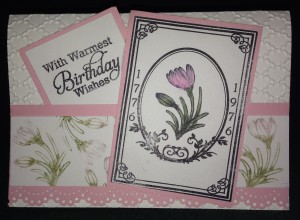 I made this card for a friend’s birthday. It was really quite easy.

The background was made using the Stampin’ Up Fancy Fan Embossing folder.

Then I cut a strip of pink cardstock. Used a Martha Stewart punch for the bottom, and cut it straight at the top. Cut white cardstock to fit in between, but before gluing it down, I stamped it with the Crocus from the Garden Seeds Packet stamp set from Inspired by Stamping.

I then stamped the main image from the same set, and matted it in the same way, but without the punch. I colored the flower using Copics. I did the same thing with the greeting, which is from the A Lovely Birthday set, also from Inspired by Stamping.

The greeting was tucked under the band, and the main image above the band. Both were put on an angle. Glue all the pieces together and layer as shown, and you’re done. 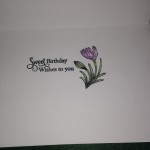 I know some people like to see the inside of cards, so here’s what I did with this one. Both image and greeting are from the same sets mentioned above. Again, The flower was colored using Copics. (Click on the image for a larger view.) 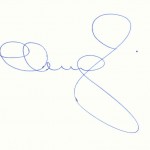 Added to the Inspired by Stamping Customer Gallery.