Following on from the wedding card I show you a few days ago, I decided to make multiples of this same card.

As I’ve mentioned before, I’m making multiples of some cards for my Christmas gift packs I’m making.

Here’s what I did:

I started off by cutting out the correct sized Copic cardstock. I thought I’d cut 12, but turned out I’d cut 15. Ooops. It took several hours of colouring to get these all completed. I did them production line style, colouring all of the dresses, then all the suits, the hair etc. 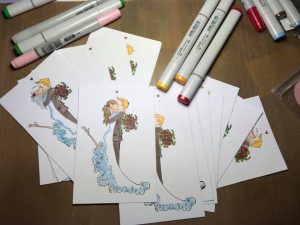 Once I’d finished colouring all 15 images, I stamped and cut the vellum strips: 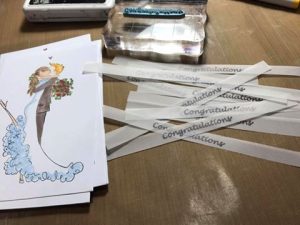 These were quite fiddly, but didn’t take up too much time. I was laying the strip across the topper and folding the sides, then adding a little Glossy Accents to 3 spots on the back of the vellum then placing them on the topper. Lastly using a glue tape to stick down the vellum at the back.

About halfway through I had a revelation(!) and began to add the Glossy Accents to flat strips, gluing them down and leaving them flat until I’d finished gluing the remainder. This was much better, and definitely more efficient. I then just had to fold down the vellum at the back and tape it down. 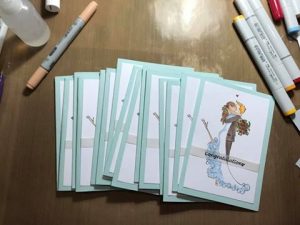 Last but not least, I added the card toppers onto the card bases. The original cards were done on Blushing Bride card stock, but I decided to use Soft Sky this time.

I now have 15 wedding cards ready to go. Insides done, and all bagged up.

Would I do this again? Probably not so many at once with the colouring. It became tedious after awhile. But I would do multiples again if it was mostly stamping.